Video Transcript
Grant Leboff: One of the things you talk about is going Rino and the difference between cows and rhinos, which might leave people a bit perplexed but maybe you can explain that?

David Hyner: When I asked top achievers; Is there a book that has made you take action, do something, that’s made you more effective. I expected them to say a biography. an autobiography, a business book, a book on Statistics… It was actually a book by an American author called Scott Alexander and it was called Rhinocerous Success.

It’s as it sounds, it’s a popular American psychology book. It’s very rah rah, but it changed people’s lives and in it he talks about how there are two groups of people. People either think like cows or rhinos and that there are, according to the people I interviewed, about 97 percent of the population who fundamentally surround themselves with people just like them – so they don’t stand out, just like them… cows in a herd – they think and behave the same way everyday and tend to do what they’ve always done and get where they always got, and then moan about it.

And then there is 3 percent of the population who are quite content to see something they want and go for it. Quite happy with the fact they may or may not get it. But I’m going for it anyway. They charge – these people are rhinos. And rhinos, they are 3 percent of the population who tend to be more affective and actually achieve the rest of us put together. I’ve looked at different parts of society and in virtually every walk of life I’ve looked at to date, the three percent rule holds true. So between two and three percent actually out achieve everybody everybody else. These people see what they want and they go for it. They charge, having it… rhino time
And it’s true, the top achievers I interviewed, they can be calm, they can be quite normal, cerebral people – quite analytical detail some of them. But when I say what they want, they go for it.

Grant Leboff: So if you’re watching this and you’re thinking, yeah I’m probably a cow, I’m with the heard, I surround myself with herd. How do you go about behaving differently to then….?

David Hyner: Great question. OK. The first thing to do is actually identify for yourself; do you want to change? There are some people who genuinely are quite happy just being who they are, fitting in. What I’m interested in are the people who do that, say they’re all right, but then moan about it – because they’re obviously not happy. So what I would say is, is it serving you just doing what you’ve always done? If not do something different.
I’ve been very blessed in that since using this stuff I’m sharing with you today, I’ve travelled the world, had some outstanding adventures and people say “Dave, how can I have adventures?” I go; go on an adventure, I dare you, 24 hours, go and book something or do something that takes you out your comfort zone. And we could do it when it costs no money, we can do it where it raises money for charity, we can go on endurance treks along the Great Wall of China or swim with sharks for charity or, we can just go and help out at the local homeless refuge. There are dozens and dozens and dozens of things we can do to have adventures. When you have adventures you get experiences, when you get experiences – it makes you want more. And it gives you a confidence then to go after more.

Grant Leboff: And one of the things you talk about is taking responsibility, which I know sounds obvious but people don’t, do they?

David Hyner: No, and once you’ve had a go at something and realise that it doesn’t kill you, it just gives you a kind of momentum to keep going. So I would really advise people to go on an adventure. Do something to step out your comfort zone. Do two or three things every single year that’s a stretch. Whether it’s write a book, start running – I know nothing about running – but do something that’s a stretch for you. Stretch your mind, stretch yourself physically, mentally, make a difference in the world but do something! 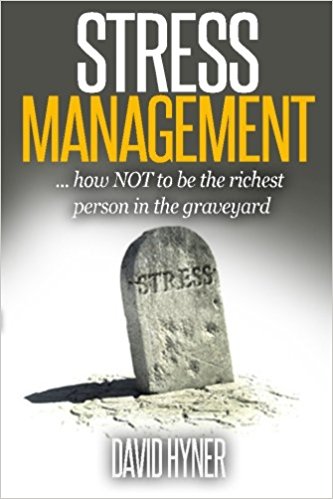