Steve Head: Yes. The context of that is when I was writing my book, I was putting together a series of steps for personal performance. The modeling bit was you’ve got all the tools. You know what you want to be. You set some goals. You’ve got a system around you. You’ve got feedback and corrections along the way. What improves your chances of success? The point about modeling, and I think I wrote down the phrase, “Model what you want,” which is a way of saying, “Don’t keep looking forward and going, ‘When I’m there, I’ll have it.’ Start behaving like it now.”

The new language on that is a phrase I used in all of my events, one of my top tips I share all over the place. I call it, ‘Act as if’. Whenever I use the phrase in front of an audience, there’s a bit of a pause because what do you mean, ‘act as if’? Act as if is really about modeling. It’s about being about something… So you’ve done all the prep. You’ve got the knowledge, got the skill, got the ability and you act the best version of you in any given situation.

It isn’t pretending. There’s a difference. Modeling and acting is if I’m not …They’re not pretending. I can’t stand and say put a surgical mask on, get a scalpel, meet you in 10 minutes outside, lie you on a table and slice you from your sternum to your lower abdomen because I’m acting like a surgeon because I’m not a surgeon, you’ll just die. You’ll bleed out. You’ve got to ‘act as if’ is where you act the best version of you where you put yourself into the character, the performance, that you want to deliver.

A great example of actors, if they’re modeling, when you do high-pressure moments like, for example, went for an interview. You know that you have to perform at your best on an interview. You’ve done all the preparation. You’ve learned what you to say, You’ve got your experience. You’ve got your anecdotes and stories you’re going to tell. Then ‘act as if’ you’ve done nursing for 30 years, assuming you’ve done nursing for 30 years.

When I walk on stage, the toughest audiences are … When I say toughest, that’s not fair. In terms of what I suppose I assess, I put more emphasis in my own head about how much harder I might have to work is with teenage audiences because I’ve got less in common with that group of people because I’m not a teenager any more. I’m 52. I still think I’m a teenager. You stand at the side of the stage. I’ve got to walk on, get their attention, win them over, chat and share ideas that I hope they’re going to listen to for an hour.

The head if you’re 11 and a 16-year-old says, “We’ve got Steve Head. He’s here to talk to you today about helping you through your exams,” and the audience is going, “Head. That’s a funny name,” and I’m standing at the side of the stage unsure whether I’m ready to go, so the strategy is you ‘act as if’. You effectively act the best version of yourself. ‘Act as if’ is being the version of you that you can be, which comes from a place of experience. I happen to have done, what, 15 years of speaking, 1500 presentations or something crazy.

That’s different. I’m not saying that doesn’t work. I’m just saying it’s not the same thing but if I present it 1,500 times and I ‘act as if’ I’ve presented it 1,500 times, and you always become the way you act, guess who turns up on stage? Nerves don’t really play a part in that. There’s no anxiety attached. So I model the best version of me but it’s not superficial. It’s not superficial.

If I love golf as a hobby, if go on a golf course, I’m not a brilliant golfer but I can play some great golf, I find it sounds like daft things but if you go buy a nice golf shirt, wear some nice golf trousers that, I don’t know, your favorite golfer wears, if it’s Tiger Woods when he was at his best or if it’s Rory Mcilroy or whoever, if I wear Under Armor stuff or whatever brand it is, and there are other brands available, if I wear Under Armor or if I wear my gear …

I’ve got all the kit on, my golf clubs are polished, I’ve got the club, I start on the first tee with the same balls the pros use and I’ve practiced on the driving range for a few hours, I’m not going to feel like Jordan Spieth because that would be faking it and that would just look daft but the best version of me might turn up that day because if you ‘act as if’, you always become the way you act. Maybe my score will be better that day.

Turning up with a pair of jeans which you’re not allowed to actually anyway but a pair of dirty shoes, a t-shirt that you’ve been washing the car in, for me you’re setting yourself up to make it harder. Do you know what I mean? That’s the principle to me. Act the best version of you. That’ what the modeling principle is about because the more you model it, the more likely it is it will turn up. You’re already there before you get there kind of thing is what I’m saying.

Grant Leboff: Is it purely in the modeling to make it happen because, obviously, everybody has good days and bad days. I don’t mean good days on the golf course but I mean everybody has days when they get up. They’re in the zone. They’re excited to do the speech, excited to play the game or whatever it is. They’re ready to go. Acting as if is almost easy. Then there’ll be other days when perhaps you don’t feel so great. You’ve woken up with a headache. Things aren’t quite so goad at home or whatever else. Then you’ve got to go into your sales role and ‘act as if’ …

Steve Head: But you know what? That’s exactly what I teach people because the whole point about as if, it is a basic psychological principle. You become the way you act. Now I accept if you’re ill, if you’re genuinely not very well, if you’ve got a stinking head, a cold, got pneumonia or something, then clearly that version of you with the best one in the world won’t be like what you want on your A game but on the scale of the normal, day-to-day variations of how you feel…

In most audiences… when I ask people in big groups, “Do you ever get out of bed in the morning and don’t feel like it, just [sighs and rolls head] I’ve gotta go to work… yeah. We have days like that. I’ve got to drive six hours and I’ve got to go… Do you know what I mean? We have days like that but if you apply the principle of ‘act as if’, which it only works as long as you actually can. I’m not pretending again, and I’m just bring the best version of me, more often than not when I walk in a room, a really good version of me does turn up.

It didn’t feel like it before I got there but when I walk on stage, I’m suited and booted, I’ve got my mic on and I’m going, “Right. I’ve done this before.” Act the best version of you. What things do you see when you act your best? What do you look like? How do you hold yourself? When that guy walks on within five minutes, how I felt an hour ago is completely gone. Actually, it even does work to a degree when you’re not that well because I’ve been up some days.

I’ve thought, “I shouldn’t be doing this.” I’ve been asked the question, “How are you?” You want to go, “I feel terrible,” but you don’t. You go, “I’m fine. I’ve had some Nurofen / Paracetamol. I’m not saying do drugs if you’re miserable but I’m not feeling great. I go on. Act as if. Bam. It turns up. There was a study done. This is actually true. Two psychiatrists, or psychologists was it, they found but that certain care facilities were abusing patients with mental illness.

Because they knew the history and the mindset, they adopted the persona of two schizophrenic patients. Undercover, went into the last six months to discover all the bad things that were going on. Then they would reveal themselves and say, “Ah ha. We’ve got you.” The sad part of the story is that after six months having acted as if they were schizophrenic, they both ended up diagnosed with schizophrenia. Now that’s an extreme example but that’s how powerful it is when you ‘act as if’. 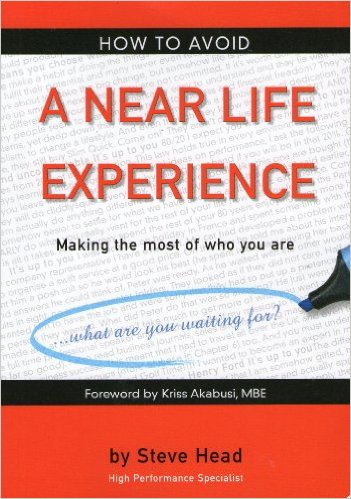 How can I best use digital marketing?

Marketing Is About Creating Your Future