Video Transcript
Grant Leboff: Tony, with people in sales, not always salespeople, one of the objections that perennially everyone gets at some point, whether they are selling services, products, or whatever, is; ‘it’s too expensive’. How would you start to deal with that kind of scenario?

Tony Morris: When someone says it’s too expensive, I don’t think that’s the real objection. To me, ‘objection’ hangs about uncovering the truth. So if somebody said that to me, about my services in sales training; ‘too expensive’ means they are comparing it with something else.

So my first question back to them would be; Really, what are you actually comparing my services with? So once I understand that, I need to understand; is it like for like? And the truth is, it very rarely is. Once I understand what they are comparing my services against, I need to know what they are getting within that. So once I’ve got a breakdown of what they feel I am too expensive against, my job is to sell myself over and above – ultimately – the competition.

But the key is, a mistake a lot of salespeople make is that they try and sell at the original price. So say, for argument’s sake, my service is £5000 and I find out that I am being compared to my competitor for, say, £4000, and I get a breakdown of what that looks like. My job is now to sell the benefits of my service for only £1000, because that person is sold on £4000, I’ve just got to sell the difference. And that becomes a lot more palatable to get across my benefits for just the difference.

Grant Leboff: So one of the things is to make sure that you understand with what you are being compared. On the scenario where it may not be a comparison with a competitor, it may be a budgetary restriction. Sometimes we will meet people who will have budgets, so how do you go about it when it is not necessarily a comparison but when there is a budget involved?

Tony Morris: Again, I think I would need to make sure that that is the truth. It is very easy for suppliers to say it’s a budget issue, so I would question that. I would need to understand what their budget process is. A good question to identify if it is true, is to say, ‘If we were priced the same, who would you choose?’ Now if they choose the other company, we both know that the budget wasn’t the truth. If they would choose me, I would want to understand why that is. And then, what I’m getting them to do is to sell me over the competition, even if it’s not identical. And then, if it’s possible, I would look to see if we could actually be flexible in terms of the budget. So we could take part payment now and the rest when it fits in with their budget, rather than just move with the price.

Grant Leboff: And what about when you have the perceptional objections? One of the common situations is when someone really doesn’t understand the cost of, to use the example we used it earlier, sales training. It could be that there is no competitor involved at all. I’ve met you, I’ve read your book, I would like Tony to do the training. But in my head I’m thinking that it must be about £2000 a day. There is no particular rationale for that, that’s just what I’m thinking. So of course, when you say £5000, it’s not that it’s necessarily anything, it’s just that – well, it’s not what I was expecting! So of course you then get; Well that’s too expensive. How would you start to deal with that kind of issue, because that’s more about perception, isn’t it, then any tangible issues?

Tony Morris: Yes, very much so. I think the key is to question the perception. I want to know where this figure of £2000 derived from, because they obviously had a reason for putting that figure in their mind.

Equally, my job as a sales professional is to build up the value of what I offer. So the perfect salesperson will actually build value, build value, build value, so when I say £5000, they go – pheww… that’s cheap! And if I don’t do that the right way, I haven’t sold myself very well. So even if their expectation here is at £2000, I want to build so much value that they are thinking it’s never going to be £2000, it’s going to be £10,000. So £5000 comes across as quite cheap for them. So that is my goal – to do that. 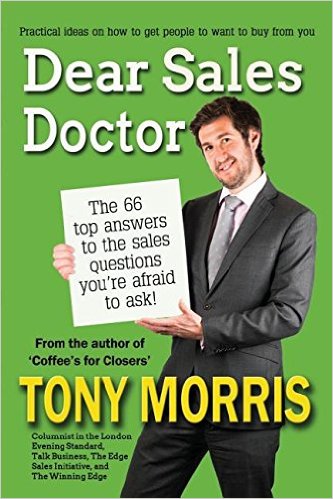 Losing a deal can be soul breaking. In this lesson, Tony Morris discusses ways in which salespeople can continue to believe in themselves.