Grant Leboff: Pete, one of the things you talk about, I think it comes as a theme throughout the book at different times, is the importance of relationship building, and a key skill to be able to form those relationships. How does one go around starting that process? I’m not talking about the relationships we’ve already got or whatever else, but actually sort of making an effort to improve those, initiate those, what are the steps involved?

Pete Wilkinson: For me, one of the foundations of building relationships is time. It’s having time allocated. I think what we have to be honest about is that we’re not going to achieve this thing by ourselves. We’re going to need people around us. For me, having the right people is essential. I don’t mean to sound callous or cold, but for me, the quality of your team and the quality of your relationship with that team is absolutely paramount. You have to realize that sometimes the team that got you to where you are might not be the team to get you to the next stage, and that’s fine. Relationships really, if you can find a way to spend time with those that you want to build a relationship with, I think what’s really important is to have it open and honest so that the people who are helping you, they realize it. I see a lot of people who have great relationships and they assume the people know that they’re making a difference. That’s not always the case.

I think what you need to look at is think about the key relationships you want to have and those are important to you, rate them one to ten in strength, in fact people watching this might want to do this with their significant other. Ask them to rate the relationship from one to ten and then say at the person if you can’t give me a ten, tell me what I have to do to get a ten. You might want to try that with your significant other. I think what you’re going to find is that relationships take time. People try to rush things. You can’t rush things with people. Stephen Covey said didn’t he, “With people, fast is slow, and slow is fast.” Just take your time with relationships, but invest the time to strengthen it, because the strength of your relationship will have a huge impact on you becoming your best.

Grant Leboff: How do you define, how do you know which are the right people to have around you and which are the ones not to if you like? Because you see all the time people perhaps keeping the wrong company, not working with the right people, having the right people on the team, especially in business. How does one start to evaluate … It’s not about whether you like someone is it? That can be a problem because …

Grant Leboff: Yeah, so how do you evaluate that in any real sense?

Pete Wilkinson: For me, I rate the quality of my people from one to ten. If I have six out of ten people on the team, I try and do something about it. If they’re eight out of ten, I’ll move them up to a ten out of ten. If you’ve got people on your team that are six out of ten and you aren’t making the progress you want, then you have to then have a conversation about deciding whether it’s a willing or able scenario. Are they willing to do it but they’re not able because they need training, or are they able but they’re not willing because they need motivating? If they’re not willing and they’re not able and they’re a six out of ten, then being honest, you have to have a robust conversation. Becoming your best means you have the best people around you. It’s really important as you grow that your people grow. You need to train them and invest in them.

Pete Wilkinson: I think you know by the results and I think you know by your feel. I think most people are spending a lot of time on things that aren’t central, Grant. You’ve got to actually, each week think about what are the things that are stopping me becoming my best. Stop doing certain things that aren’t helping you, aren’t serving you, and direct some of that time towards building your relationships. For me, if you’re making your progress that you wish to make, if you’re making progress towards your plan, then your relationships are working for you. If you’re falling short, then look at the people around you, because those relationships, those people might not be up to the level it should be. 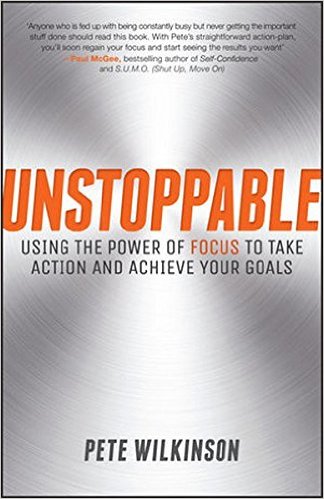 Pete’s professional career started in the 1990s with senior management roles in retail. He has managed a large team of 300 people, along with having P&L responsibility for a £30m business. Pete has also run his own retail business with a much smaller team. He has an MBA from Newcastle Business School, is a Certified Practitioner of NLP and is also an Ironman Triathlete.

Do you know what you are going to do over the next 12 months that will make you move forward and progress? In this lesson, Team builder and author, Pete Wilkinson, sets out where you should start.

We are often told that we need to work on our weaknesses. In this lesson, Team builder and author, Pete Wilkinson, explains why, if you're really rubbish at something, you shouldn’t spending a lot of time and money becoming average. There are other options…

We all keep diaries and track our appointments, but is that really ‘personal organisation’? Pete Wilkinson, explains how personal organisation is more than just keeping a diary - it’s about improving the level of structure around yourself, so you get more out of your time.

When you think of strategic thinking, people mainly think of leading others, rather than themselves. In this lesson, Team builder and author, Pete Wilkinson, explains why ‘self leadership’ is so important.

How do you create the core objectives in your life?

How do you get a vision for yourself?

We all recognise the importance of self image, but how do you achieve that? In this lesson, team builder, Pete Wilkinson, describes how you get a vision for yourself

How do you develop the right attitude in business?

People often say that if you want succeed in personal and business matters, you have to develop the right attitude. In this lesson, team builder Pete Wilkinson, author of ‘Unstoppable’, explains the importance of the right ‘mindset’.