Google is now favouring mobile friendly sites. In this lesson, Dave Chaffey, author of Digital Marketing, explains why ‘mobile friendly’ websites are much more than simply being websites on wheels.

Video Transcript
Grant Leboff: Dave of course one of the biggest things that have happened in the last few years is the impact of mobile on marketing and how that’s affecting the way people communicate and some of the things they have to consider when they’re putting communications together. What for you are perhaps the biggest things that marketing managers, business owners have to start considering in a mobile age?

Dave Chaffey: Well, yeah, certainly a massive impact, and in particular we’re looking at smartphone because I think the tablet against desktop there isn’t such a huge difference. With smartphone of course we’re using it when we’re out and about, or we’re multi-screening as we’re watching the TV. I think the first thing is that it’s got to be integrated with your other activities. Then it’s about providing value for that audience in that context, so you can develop new propositions that work in a particular situation.

If you look at the betting companies for example, BetFair, they’ve developed mobile app, and that’s providing betting options in real time that you couldn’t previously have through the website. That’s actually driving new business for them. But I think the most important thing is to ensure that you do have that mobile throughout the customer journey it is integrated, but it does work. I think many mobile experiences are broken.

Grant Leboff: Absolutely. One of the words you touched on there, which I think it’s really important and I think too many people miss is this idea of context, is that once someone is on a mobile device there’s a context in which they’re searching, looking, or interacting with – whatever it is. How important you think it is to consider context and utilize that within the mobile screen?

Dave Chaffey: Yeah, it’s really important, particularly for local businesses I think. There’s a horrible acronym really but we’ll go there. It’s SoLoMo, so social, local, and mobile together. That’s all about getting context and being more adaptive in the content you deliver.

One of the things that actually bugs me about mobile marketing is people will make generalizations, so they’ll say, “You need a responsive website,” or, “It’s got to be mobile first.” Let’s look at each of those. Yeah, first with a responsive website this is where as the user is accessing the site it will re-scale and content will reposition so that it’s easy to view on the smartphone or tablet. But the problem with that is that the context may be lost.

A good example of someone who gets that right through an adaptive design is Lufthansa. If you imagine it you’re at the airport or you’re travelling to the airport, you need different sorts of information about flights and where you need to go. So rather than just rejigging the screen, if you like, they actually provide new functions that you’ll see on the smartphone version, whereas the desktop is more about when you’re looking at destinations and picking up a relative or so on. It’s important to have that adaptive approach.

Now the other one I mentioned is mobile first. This is saying we’ve got to be quite careful that when developing our mobile experiences we don’t make the desktop experiences worse. That will sometimes happen because the great thing about mobile is that you do reduce the options, you do simplify the design, and that’s essential on mobile, but actually it might mean that some of the content / context for different audiences that you have on the desktop sites are missing.

What I’m seeing the larger businesses doing is that they’re actually developing different experiences for different platforms. We have, you know Appliances Online?They’re white good fridges and electricals of different sorts. What they actually have because they’re a big enough brand to support it, they have a separate UX team that’s working on the smartphone, tablet, and desktop versions, and they’re doing conversion optimization so they get the best revenue per visit from each.

Now if you imagine you compare that to a responsive site where it’s not optimized for each platform you’re already going to be missing out. So I think marketers, and it’s understandable for small businesses, they’re treating it as a bit of a tick box exercise, so yep, we’ve got our responsive site, but to me that’s just the start of optimizing it.

Grant Leboff: Really it’s about being customer centric again, isn’t it, and thinking about the user experience on each platform and how that may differentiate, and sometimes maybe it won’t and sometimes it will.

Dave Chaffey: Yeah, that’s right. Again, you can only do that by research, testing, analytics. One thing I’d recommend for anyone watching who is concerned about their mobile, because the other issue we haven’t looked at is mobile search, Google is now favoring mobile friendly sites. In Google Analytics one of the key techniques that people don’t know about is a segment or an advanced segment which allows you to isolate a particular audience so you can say just show me the smartphone visitors or show me smartphone visitors from Google or search engines in general. You need to make sure that you are getting visibility on smartphone because some businesses are being hit because they don’t have a responsive site at all. 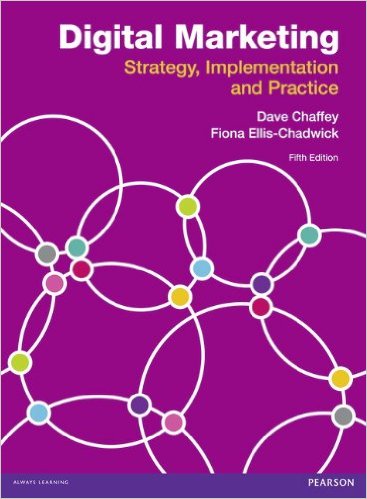 Dr Dave Chaffey is CEO and co-founder of Smart Insights (Marketing Intelligence) Ltd., and has been recognised by the Chartered Institute of Marketing as one of 50 gurus who have “shaped the future of marketing”.

We have all heard of the Sales Funnel represented by AIDA, but what does the acronym RACE stand for in digital marketing? In this programme, Dave Chaffey explains what it means and how it works.

Affiliate marketing may sound great for the likes of Amazon, but is it good for you? In this lesson, Dave Chaffey, author of Digital Marketing, discusses how companies can develop similar arrangements that work well on a reciprocal basis.

How do you measure the effectiveness of your digital campaigns? In this programme, Grant Leboff and Dave Chaffey, author of Digital Marketing, discuss some tools and key metrics in terms of social media monitoring that companies should start to consider.

From one to many

How do you encourage greater interaction with your online contacts? In this lesson, Grant Leboff together with Dave Chaffey - author of Digital Marketing, discuss some tricks and tools to help businesses deliver really targeted messages.

If your company isn’t a high ranking brand on the search engines, how do your potential customers find you? In this programme, Grant Leboff asks Dave Chaffey, author of Digital Marketing: Strategy, Implementation and Practice, how you can become visible, online.

Google is now favouring mobile friendly sites. In this lesson, Dave Chaffey, author of Digital Marketing, explains why ‘mobile friendly’ websites are much more than simply being websites on wheels.

Many people, mistakenly, think that digital marketing has moved on from email. In this lesson, Dave Chaffey explains why this isn’t the case and how it is being used to great effect today.

One of the terms that people hear about in marketing, and don't always completely understand, is ‘personas’. In this programme, Dave Chaffey, author of Digital Marketing, explains to Grant Leboff what personas are and how they can be useful.

The importance of a digital strategy

To build a successful website, surely everyone needs a digital strategy plan?. In this lesson, Dave Chaffey, explains that obvious as it may seem, not everyone has one.

The challenge of customer engagements

Once a visitor has successfully engaged with your website, what happens next? In this lesson, Dave Chaffey, author of Digital Marketing, makes the case that that the biggest challenge of all is the long term engagement.

Is design the ‘be all and end all’ of a successful website? In this lesson, Dave Chaffey, author of Digital Marketing, explains that it all starts with the analytics…