Video Transcript
Grant Leboff: Andy, in your book, you talk about USPs – and I completely reject the idea of USPs. You talk about the USP being ‘the usual stuff that people say’. So I would love you to expand on that a little bit more.

Andy Hanselman: I think very often we see businesses shouting out, telling everyone how wonderful they are at things, and actually most businesses are saying the same things. In fact, after speaking at conferences, I actually get people to stand up and talk to each other and then I say, sit down if you’ve heard any of these things and it’s; the quality of our service, our people, our expertise…  Now I’m not saying that any of these things are not an integral part of their differentiation, but if everyone is saying them, it’s actually how you demonstrate it, rather than what you say.

Grant Leboff: So if businesses are saying the same things, and I agree that they do, people say that they’ve got excellent customer service that’s not unique, but other people say that as well. So how do businesses start to communicate… if you’re going to talk about yourself and make it sound a little different?

Andy Hanselman: I think there are a couple of things. First of all, let other people do the talking. So it’s doing stuff that actually gets people talking. This is because I’ve yet to go on a website of a hotel that says that they offer a fantastic customer experience apart from Tuesdays and Thursdays when Kevin the manager is in. But actually go on trip advisor and you hear other people saying it so yes, you can say all these things but ultimately it’s what you do. So the key bits for me is getting everybody in your business to buy into it, so that is simply, I get people to sit down and work out ‘what is your dramatic difference’ and then how do we demonstrate it in almost everything that we do?

Grant Leboff: So would you advise businesses, in terms of a website, and you’ve got to say good things about yourself, to let some of the other people do it for you? So use testimonials and other things like that?

Andy Hanselman: Absolutely, it’s what other people say. Even now I think some people go; well, they’re bound to get some people on our videos saying great things about them but I still think there’s an element of credibility and I think, therefore, it’s making sure the key things that you want to get across to people are understood by all your people but it’s recognised by our customers.

So a very simple thing is, I get customers, my clients, to say to their customers ‘why do you buy from us?’- You’ve got to be careful about how they ask that question! –  but if people can then start telling them what they see as being the dramatic difference, then those are the things that start coming through,  because I see in some businesses, they think that everybody else is doing the things that they take for granted and actually, they’re not. In other words, sometimes it’s hidden, they have a dramatic difference that people don’t know about until they start listening to customers and see what they are saying because it works the other way, there are those who think that they have something that is unique and it isn’t. 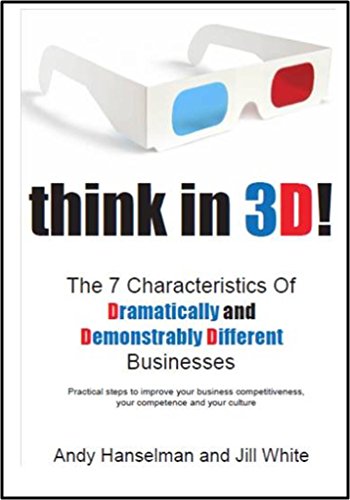 The 7 Characteristics Of Dramatically And Demonstrably Different Businesses.

Andy Hanselman has spent over 25 years researching, working with, learning from, and speaking about successful businesses, their leaders and their people.

Does your CRM dictate who your best customers are? In this lesson, Andy Hanselman, author of ‘Think In 3D’, discusses why turnover isn’t the only measure of a successful trading relationship with your customers.

Do you measure how satisfied your customers are by the number of complaints you get? In this lesson, Andy explains that there’s more to measuring customer satisfaction than that.

What makes your business different from your competition? In this lesson, Grant and Andy Hanselman discuss how businesses can identify what makes their company recognisably different.

Getting that vision thing

Martin Luther King didn't stand on Capitol Hill and say; I've got a strategic plan and a cash flow forecast – he told everyone that he ‘had a dream’. In this lesson, Grant Leboff discusses with Andy Hanselman, author of ‘Think In 3D’ how businesses need to visualise where they want to be and how they want to be seen by their customers.

How to make your company stand out from its competitors, and where to start

If you are going to create a dramatically different business, where do you start? In this lesson, Andy Hanselman explains that in many cases the answer is found in what other people think…

Innovation doesn't have to be a new, all-conquering product that's going to change the world. Andy explains the importance of having a culture that allows companies to generate new ideas, however small.

How well is your business really doing? In this lesson, Andy Hanselman, author of ‘Think In 3D’ discussed the dangers of what he describes as ‘Driving without a dashboard’