Mark and Grant discuss that successful selling is not a case of attitude setting altitude. It’s a firm belief in the value proposition of what you are selling.

Video Transcript
Grant Leboff: Mark, we’re talking about debunking some of the myths about sales, and it’s interesting with myth #2, because you describe it as attitude sets altitude. That’s interesting because, to an extent, surely attitude does make a difference. So perhaps you can describe a little bit more about what you’re saying?

Mark Blackmore: Absolutely. This upsets lots of sales directors because they’re going; “Look guys, we need to create energy for us to sell these products” and I get that. The reality is, I’ve worked in organisations whereby we had energy – we had people doing 150 dials a day. The reality was, the product was rubbish. So no amount of happy clapping in the office at the beginning of the day is going to help a salesperson – when they pick up the telephone – and the customer says; ‘Your product is poor, I don’t want it’. So that’s the point. It’s not a case of attitude setting our altitude. It’s a firm belief in the value proposition of what you are selling. Get that right and the rest follows.

Grant Leboff: So we’re not saying here that attitude doesn’t matter. What we’re saying is, it’s not the principal, primary, motivator in the jigsaw puzzle. Is that right?

Grant Leboff: So even when you believe in your value proposition, sales people can often go through a bad spell, can’t they? They can have a bad patch, when it’s not quite working out. At that point, is ‘attitude’ damaging performance? Is there anything that salespeople should be thinking about at that moment when, perhaps, they feel ‘I love the product but I’m just having a few bad days at the office’. What should sales people be doing then?

Mark Blackmore: It comes back to; are they doing the metrics etc.? The number one area is that you are most positive and you believe in what you do. If you are positive about running, you don’t need to be kicked out of the bed in the morning to go running. So it’s positivity in what you’re doing, and that normally comes from re-analysing the product. I guarantee if their attitude is slipping it’s because they’ve been told ‘no’ too many times. So our job as sales directors is to then help them reinvigorate their belief in what they are selling. I guarantee that from there, everything flies. 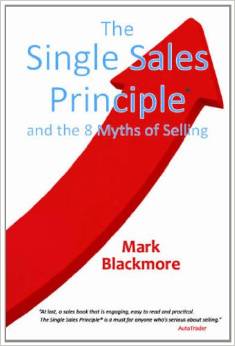 and the 8 myths of selling

Mark Blackmore is an experienced consultant and passionate sales and management educator. He has consulted and trained in a wide variety of sectors and his clients include both blue chip and household names (Barratt Homes, Mamas & Papas, G4S, NHS; Nokia, AutoTrader; Google, Hellmanm Logisitcs).

Exposing Sales Myths #4 – Customers like to talk about themselves

One of the biggest challenges for a salesperson is trying to create a rapport with a customer. Mark explains that getting customers to open up and talk is not all about discussing the golf trophy on the office wall.

Mark Blackmore explains to Grant Leboff that customers will only ‘buy you’ because you have the expertise and personal credibility that they seek. It isn't because you're a great guy, or take him for golf, or because your corporate hospitality is fabulous.

Mark Blackmore discusses with Grant Leboff that successful selling is not a case of attitude setting altitude. It’s a firm belief in the value proposition of what you are selling.

Sales and Marketing educator, Mark Blackmore, explains to Grant Leboff why the salesmen's mantra - that they should ‘always be closing’ - is no longer appropriate in today’s selling environment.

The importance of the single sales principle

What makes a good salesperson? In this lesson, the last of this series, Sales and Marketing educator, Mark Blackmore, sums it up in 16 words.

Surely all sales people have to plan their calls ahead, but how much planning is too much? In this lesson, Sales and Marketing educator, Mark Blackmore, discusses with Grant Leboff where to find a balance between too much research and actually selling.

Many sales people still maintain that selling is ‘all about the price’. This would mean that we would all buy the cheapest food or clothes, but we don’t. In this lesson, Sales and Marketing educator Mark Blackmore, explains to Grant Leboff that price isn’t everything, it’s the perceived value of a product that counts.

Exposing Sales Myths #6 – Sell the sizzle not the sausage

In a world where so many products are commoditised and it is difficult to tell competing products apart, surely it’s the sizzle in the presentation that makes the difference? In this lesson, Sales and Marketing educator, Mark Blackmore, explains his view that this isn’t always the case.

Many people insist that sales is a numbers game. To be successful, all you need to do is just keep bashing away, making the meetings, knocking on the doors… but Sales and Marketing educator, Mark Blackmore, disagrees. In this lesson, Grant Leboff asks him to explain his thinking.