VIDEO TRANSCRIPT
Grant Leboff: So Adrian, one of the things you speak about in your book, which really resonated with me, was about becoming part of your customer's story. So can you explain a little bit more what you mean by that? Adrian Swinscoe: I think that the interesting thing that's happening, is that as this world gets ever more competitive, we've got way, way more choice, I think products and services are starting to all blend together. And I think that people are also starting to be a bit more conscious about what they buy and why they buy things. And, therefore, they're looking to align themselves with things that make sense for them, that have a meaning for them. So let me give you an example of a company that I talk about in the book as it relates to that. And it's funny because I've got a pair of their garments on today. And it's a company called Hiut Denim. Now, it was started by a guy by the name of David Hieatt, spelled differently. He's an old ad guy, but he's part of the original team that started Howie's, which is a UK clothing brand. But then he left that, after they sold it to I think Caterpillar, but then after a period of time when it started this denim company down in Cardigan [in Wales]. Now the really, really interesting thing about it is that he's created this company that for two reasons. One is that they decided they wanted to make the best jeans that they could possibly can. So they didn't want to make a lot of jeans, they wanted to make the best jeans. But they're doing it specifically in Cardigan, because, did you know, that Cardigan used to be one of the largest producers of denim in the whole of Europe. Grant Leboff: Oh, wow! Adrian Swinscoe: Before a lot of stuff got moved off shore, or outsourced to the far east where it was much cheaper. So one of those interesting things is that they've got all this inherent skills in the town, but are just going to waste. So what he wanted to do is almost to try and create a more of an artisanal product, manufacturing kind of company, which allowed them to one, leverage all the skills that are there, but also leverages legacy base of skills. But also to help regenerate the town, but is also making great products. And I think that, as a story, is really interesting. And it's something that really buys into ... Well, I buy into, because I bought a pair of their jeans. And I think it's examples of companies like that. And there's other examples, like say Toms Shoes, or Patagonia, or so on and so far, that do things in a slightly different way that has a meaning and a purpose, or stand for certain things that just stand out amongst all of this noise that we see in the marketplace. And I think there's a really large trend that customers are starting to latch onto. So it's I know what I'm going to spend my money on, but can I spend on my own something that gives me a slightly extra meaning? Or that aligns with me, and what I do, and what I believe in? Grant Leboff: So that would suggest that, in terms of attraction of customers, it's not just about what you do, but it's the values that sit behind that that will help you bring customers in. Is that your view opinion that important now? Adrian Swinscoe: I think it's becoming increasingly important. I'm not saying people can't just do great products and great services, and that's not enough. I think is enough. But actually, I think there's an opportunity to do something different, and something extra that can make your ... the enough bit, the great product and service ... it's almost adds a plus onto the end. So it's almost bit like, don't dismiss it if you don't think it makes sense for you, because it could be an opportunity that could help you just stand out amongst the very competitive market. There may be small changes to the spoken word in this transcript in order make it more readable. 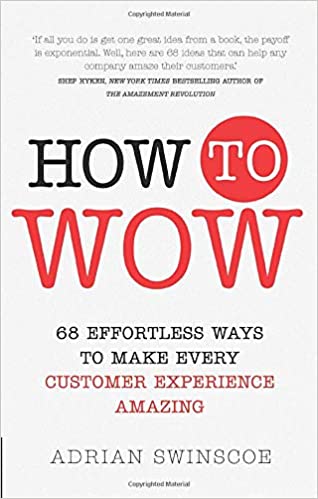