In this lesson, Grant discusses the impact influencer software, like ‘Peer Index’ and it’s affect on executives of the future.

Grant Leboff:    So we’re talking about individual brand equity, and the fact that everything we do online is now captured, and the people you connect with, the tweets you do, and all of that sort of thing. It’s much more subtle than ‘I was in the pub yesterday’ with a pitch. We’re talking about more subtle things that build brand equity. But what I was really interested in is, you talk about CEOs of the future who may be picked on how visible they are and what they’re doing, and I agree with that. But what I was going to say is, I think we’re in an interesting time because we’ve now started to get influencer software, like ‘Peer Index’  [http://peerindex.com] and ‘Klout’  [http://klout.com/home].

The hierarchies used to be based on positioning, so if you’re the CEO and I’m the post boy, you’re more important than I am in that organisation. But today, hierarchies are now becoming about how networked you are, and how connected you are, and because that’s so visible – in the old days it would be an old Rolodex on a desk, no one would know necessarily – but now it’s so visible, can you see a time when companies are starting to look at things like – albeit at the moment that is a fairly blunt instrument, but these things will get more sophisticated – where they’ll want employees with a certain ‘Klout’ score or with a certain ‘Peer Index’ score, because that will indicate that these people are visible and are connected?

David Taylor:    It’s an interesting point you make. I think a lot of things about social are just re-working of what we do anyway. If we were to go back 100 years you’d often want to employ someone with a good contact book who was very well connected, and the aristocracy were always incredibly well connected. They would have an old fashioned diary and within it they would have half the Princes of Europe and they could call up one of them, and so, in a sense, they are people of influence. And we hear about persons of influence and that has never changed.

I think it is the online credibility, and this visibility, and these networks you have. I don’t think that’s changed, its just the technology has allowed you… to give you an example; I’m just working with a major hotel chain and that just found me online. They had no idea who I was, never heard of my company, never knew anything about me and they just found me online. They were obviously searching for key words and I was very visible and there’s a huge amount about me online. I was approached my someone in Malaysia to do a training course in Malaysia, I mean it’s just incredible, really, that’s there’s a businessman from Kent suddenly being asked from someone in Malaysia, ‘would you like to come to a conference?’, and fly half way round the world. But in a sense, and this is quite an important point, I’ve always been ‘social’. I’m a social person by my essence, I’ve always had lots of friends, I’ve always been the one who organised the parties, the holidays, the weddings, the stag weekends, I’m a very social person. I like meeting people, I like networking, I do a lot of face to face business networking, and really, what ‘social’ is doing is magnifying that.

But another interesting point is, how many companies are truly ‘social’? They want to do social media, ‘we’d love to be on Facebook’, ‘Wow! we should be all over Twitter’ – but you’re not ‘social’. You’re not listening, you don’t talk amongst yourselves, you don’t care about your customers, you don’t want to have any dialogue with your customers, so how can you be ‘social’? So it is quite an interesting thing. There is a disconnect somehow, it’s almost that social media is this incredibly new way of being a human. It’s not. Humans have always done what they do. There’s a phrase, ‘Social is the new campfire’. We were sitting in caves thousands of years ago talking around the campfire. We haven’t changed – the technology has changed – and how you leverage that technology, that’s the key thing. 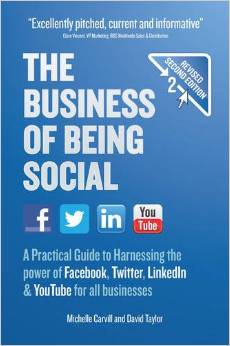