In this lesson; Shirra Smilansky author of Experiential Marketing, explains how to build a picture of your primary target audience member.

Grant Leboff: Obviously one of the most important things to make any marketing activity successful is understanding and getting the target audience right. How would you go about that when you're starting to think about experiential?

Shirra Smilansky: I think when it comes to your target audience, I often hear brands say that basically they want to talk everyone - to some degree or another - because they don't want to exclude anyone. I guess that's where the big issue, I take, is with the matter is - actually you do need to be talking to someone quite specifically. If you try and talk to everyone, you ultimately water down your message for fear of alienating somebody in that broad group of people which ultimately are too vague and wishy washy to ever then, know who you're speaking to. It's about picking your primary audience and understanding that you can have a secondary audience and you can also speak to them, but that you need to really have a very, very clear picture of who that person is. What is their likes, their dislikes, what is their state of mind, and also what is that aspiration?

So if money and time was no object, what would they be doing and how can you tie some of that aspirational lifestyle into that communication with that audience as well? The process that I propose to take (and it's something that we look at in more depth, in actually the set message planning process, which I go through my book - it's an activation framework) is a day in the life analysis. Once you know, this is my primary target audience member. Name them, so  give them a really, really specific identity, a name a location, have a person that you've physically met in the real world in mind, so that you can start to use that person as a reference point when you're asking yourself certain questions. Then look at, from the very moment that they wake up on a weekday, till they go to bed and also on a weekend, what would they be doing?

If they wake up at 8.00 am, say your target audience is called Annie and she's 28 and she lives in Clapham, what time does Annie wake up in the morning? Okay. Annie wakes up at 8.00 am. What does Annie do? First thing she does, checks her phone on social media. She checks Instagram and Facebook, she doesn't use Snapchat. Then what does she do? She gets in the shower, she goes to walk her dog. Annie is actually a freelancer, so she goes to the local coffee shop... and you get the idea. So you paint this picture of what is Annie  doing in typical weekday, what is that one day on a typical weekend and then you do the aspirational portraits, so if money and time was no object for Annie, what would she be doing? Actually you can start to identify some really nice insights on where to engage your audience and like I said, what is the right state of mind?  Where will they have dwell time and what would be the engagement opportunity at that location?

It might be that every morning she actually grabs a takeaway, egg and bacon roll from her local cafe...  and well actually, there's a sandwich media opportunity because they brand the packaging that the takeaway containers come in. So that's an opportunity to create an awareness piece of communications to target Annie. While on the other hand, when she goes to the park, as she walks her dog in the local cafe, there's actually a quite high footfall because it's in a local area which a lot of people commute from and so there's an experiential site you can hire at that cafe area and you can do some activation around that in the real world. So it's looking at where to engage and with what style of communication based on her state of mind.

Grant Leboff: And how does that work for a business? Let's say they've decided who their primary customer is. We've gone from everyone and now they've got a primary... How do they go from that primary customer group - because it's always going to be a group, it's going to be a segmented group - into creating your persona, which in our case is Annie. But how do they go from that group, which is still... there's diversity within the groups of creating this one persona. Would you only have one? Would you have a couple of personas, How would  that transfer out?

Shirra Smilansky: Say broadly speaking, your audience might be a millennial audience based in major cities, active professionals... so you've got a rough demographic, socioeconomic idea of who it is you're talking to. How do you then say, okay, well it's Frank, not Johnny? Part of it would be looking into customer data, trying to understand actually who your perfect customer is within that audience and then building up and extrapolating around that, based on a real world reference that meets those criteria. So if you know that there's a certain geographic location that has an especially high density of your target audience member, there's a certain type of profession which has an especially high density of your target audience members... these are all facets. Maybe there's a certain type of media, like a magazine or website which is primarily consumed by that bullseye target audience member, well then you can start to look at a slightly smaller net from which you can then think, well actually, which real world reference do I have? And paint the picture around that... that human being. 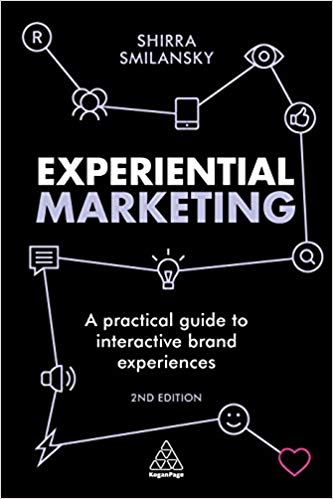 How do I make my experiential marketing work?

Experiential Marketing is a multi-sensory experience designed to build an emotional connection, but how does a business actually make it work? In this lesson; Shirra Smilansky author of Experiential Marketing, explains that to help businesses make experiential marketing work, she uses the acronym; BETTER.

How can I make my digital platforms an experience?

How do B2B businesses start to think about delivering experiences through digital? In this lesson; Shirra Smilansky author of Experiential Marketing, explains that a live brand experience does not need to be executed face to face. There are many digital options.

What is the experience economy?

The term the ‘experience economy’ was first used in 1998 by B. Joseph Pine II and James Gilmore in the Harvard Business Review. In this lesson Shirra Smilansky brings it up to date.

How does experiential marketing lead to sales?

Experiential marketing is often seen as organising just a fun event. In this lesson, Shirra Smilansky author of Experiential Marketing, explains that its principles are related to the classic AIDA purchase funnel

In this lesson Experiential Marketing expert, Shirra Smilansky, explains that brand ambassadors are unbelievably crucial in experiential marketing, in live brand experiences and in business as a whole - but who are they?

How do I create the right messages?

In this lesson, Shirra Smilansky explains how to create the right message and prevent it from getting lost somewhere along the way...

How do you target the right audience?

One of the most important things to make any marketing activity successful is understanding and getting the target audience right. In this lesson; Shirra Smilansky author of Experiential Marketing, explains how to build a picture of your primary target audience member.

One of the most important factors for engaging today’s audiences effectively is being transparent, being authentic and being true to who you really are. Shirra Smilansky explains that when it comes to brand storytelling, the brands that are really winning today are the brands with a story to tell.

What is experiential marketing?